On the morning after the great phone heist the sun rose in the east, the Thames flowed through London, and life continued on. So in keeping with the British spirit of “Keep Calm and Carry On”, Ian and I got down to business on Thursday morning.

First stop, we returned the defective fan we purchased earlier in the week. Then we stopped at Carphone Warehouse to purchase a new phone for Aunt Jane. Despite it’s name, this place does not sell car phones. And second, it is not a warehouse. But I did purchase my first Android phone, which is making me love my iPhone more than ever. Given everything we have planned, I really needed a phone for the next 10 days, so I rationalized that it was a necessary purchase. 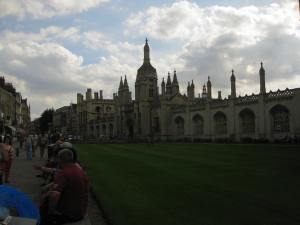 Our business accomplished, our sole destination for the day was Cambridge, sixty miles north of London. We traveled by train from Kings Cross Station and then walked from the station in Cambridge into town.

First stop was lunch at the Rick Steves-endorsed pub, The Eagle, where Ian had his very first “bangers and mash”, or sausages with mashed potatoes. He complimented that with a side of onion rings. I had a salad with grilled chicken.

We then toured the town, including a walk along the River Cam to watch the punters. These are flat-bottomed boats that are propelled by someone pushing them along with a long pole. Passengers sit in the boat, while the punter stands at the rear of the boat and propels the boat forward using a long pole to push off the river bed.

Punting seems like something you can only do in a shallow river, so I don’t expect to see it on the Hudson when I return. And it’s different than the gondolas in Venice, which use oars to steer and move the boat. Anyway, it was nice to watch, but Ian and I decided to forgo an actual ride.

Punting on the River Cam

Back in London we had a nice Italian dinner in our neighborhood in a restaurant (Ian picked it out) and made plans for our last full day in London. The week went so fast! We were lucky to have such warm and wonderful weather. And although we had a few bumps in the road, we really had a lot of fun.

Changing of the guard

On Friday morning, we set out for the one big tourist activity we hadn’t partaken of, the changing of the guard. Of course, Aunt Jane screwed up again and we took the Tube in the wrong direction. It looked like we might not make the main event, but when we got to Buckingham Palace, the guards were still assembled and in the middle of the musical portion of the program.

They were performing a medley of theme songs from James Bond movies. This was something that surprised me the first time I went to the changing of the guard, that they did this extended musical number, but it’s a big feature of the program.

And Ian and I got fairly close to the action to see them march back up the mall toward St. James Palace, so all was not lost.

We left Buckingham Palace and walked to Westminster Pier to board a boat to take us down the Thames to Greenwich, birthplace of Henry the VIII and Elizabeth I, Greenwich Mean Time, final resting place of the Cutty Sark, and a lot of naval stuff. 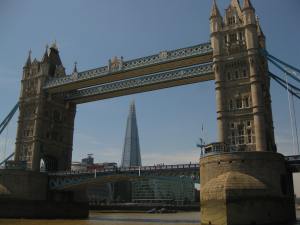 Tower Bridge and the Shard as seen from the Thames

We disembarked in a pretty village and walked around a bit. We hiked up to the Royal Observatory and stood on the Greenwich Meridian. After a very nice lunch at the Trafalgar Tavern, we took the Docklands Railroad back to central London and then returned to the flat to start packing up. 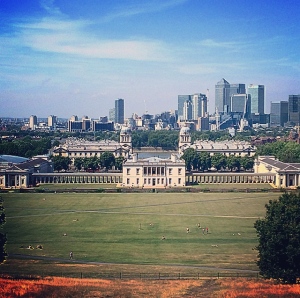 Royal Palace at Greenwich with Canary Wharf in the background

Dinner on Friday was at one of my favorite restaurants in London, Maroush II, part of the Maroush group of Lebanese restaurants in London. I knew Ian would like it and he did. Even though they have several locations in London, including one right near our flat, we had to go to the one in Knightsbridge. It’s the one I would go to when I was studying here, and I always go there when I’m in London for work. The food and the service are outstanding.

Back to the flat for final packing to get ready for our trip to Edinburgh in the morning. Our Scottish adventure awaits!

We had a great last 2 days in London. Thursday we decided that we would either tour Cambridge or Oxford- some places I was looking at for University 😉 . We decided Cambridge would get the honor of our visit since it was a lot closer and we’d have more time in London when we came home.

As Jane said, I tried “bangers and mash” for the first time and I loved it. I enjoyed Cambridge a lot and it is definitely a college town with over 30 colleges. We visited the outdoor market in the center of the town where I got some decorations for my dorm room.

I enjoyed the view down by the river Cam and would of liked to go punting, but it was not possible with the time we had. It was still a very successful trip and we headed back to London on the train. We had a delicious dinner that ended the day well. 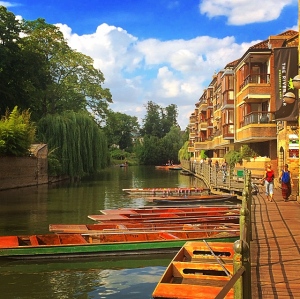 Friday we got off to a late start but, nonetheless, we got to see the changing of the guards and I got some great pictures and videos. I feel bad for those guards it was so hot out I was sweating in a t-shirt and shorts and those guys had full uniforms on. I guess that’s what you get for protecting the Queen.

We traveled by foot to Westminster Pier and boarded a boat that took us to Greenwich. I was excited to see Greenwich seeing as how it’s famous for the Prime Meridian that separates our world into the Eastern and Western Hemisphere.

We journeyed to the Royal Observatory and got a great view of the river and Canary Wharf (see pics below). We had a delicious lunch at a famous tavern in Greenwich that I suggested we go to. 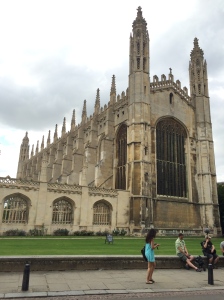 After a long tube ride back to London we headed back to the flat so Jane could pack (I never unpacked so it wasn’t necessary). We headed to a Lebanese restaurant, Maroush II, and I wasn’t sure if I was going to like having never tried that cuisine before.

Boy, was I wrong- it may have been the best thing I had in London. The staff were so friendly and the portions were very generous. It was a great experience. I ended the meal with an assortment of Sorbet: Lemon, Mango and Green Apple, which is made in house. It was simply marvelous and the perfect end to our time in London. The next morning we left for Edinburgh!

Obligatory Changing of the Guard Selfie

Changing of the Guard

At home in Italy, and bringing Italy into my home

A guide to Italian wines, grapes and producers

Trade your space for a change of pace!

A written shot of espresso to inform, excite and encourage you to experience Italy. Today's Brew.